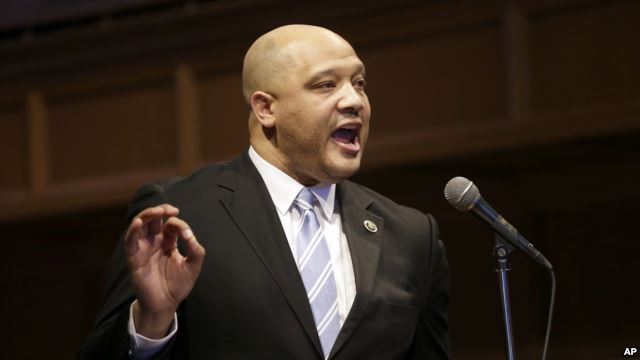 It is important to push back “against the narrative that Muslims represent
terrorism and extremist ideologies,” said U.S. Representative Andre Carson, one
of only two Muslims in Congress.
The Indiana Democrat told VOA Urdu that Muslims need to present a positive
image to American society.
“A lot of terrorism activities are thwarted because Muslims are working
with the law enforcement agencies and they are part of the law enforcement
agencies. But you never hear about these stories,” he said. “America is ours,
and until we dismiss the negative notions of what it means to be a Muslim, we
will still face this kind of discrimination across the country.”
Carson was referring to the temporary detention Monday of a Muslim student
from suburban Dallas who was pulled from class after he showed a homemade clock
to a teacher who mistook it for a bomb. Ahmed Mohamed was questioned by the
principal and police, then was handcuffed and taken to a police station.
Intent questioned
Larry Boyd, chief of police in Irving, Texas, told CNN that after school
resource officers determined the device was not a bomb, officers investigated
whether Mohamed had brought the device to school with the intent to create
alarm. Boyd said it was against the law to make even a phony bomb.
Representative Keith Ellison, the first Muslim elected to the U.S. House,
told VOA Urdu that Mohamed was doing what every kid his age should be doing, yet
some people treated him like a criminal.
“There are bigoted, unfair people all over the world, not just here in the
United States,” Ellison said. “But this is not a static situation. American
Muslims and people of other faiths who believe in inclusion are busy, too. And
we are reaching out, moving forward, building the bridges to make sure that a
young Ahmed Mohamed can build that clock, can be creative and innovative.”

As Ahmed’s story spread across social media, Twitter erupted with support
for him. The hashtag #IStandWithAhmed was tweeted more than 1 million
times.
President Barack Obama invited him to the White House, and Facebook founder
Mark Zuckerberg posted that he wanted to meet him. A NASA scientist asked Ahmed
to give him a call in a couple of years for a job opportunity.
Texas Governor Greg Abbott also weighed in, cautioning that he did not know
all the facts but saying that police were wrong to detain the boy.
‘Environment of fear’
Ellison said Muslims have a lot to offer to the United States, and once
their contributions are better known, things can change for better.
“There are over 30 clinics set up in low-income communities across the
United States, founded and run by Muslims, where people of any faith can go and
get health care service for free,” he said. “A lot of Muslims are running for
office, offering free legal advice and starting businesses so that people can
get jobs.”
Some Muslim organizations have blamed the “environment of fear” created by
anti-Muslim rhetoric for suspicions against the Muslim community. The Council on
American-Islamic Relations said Ahmed’s case was an example of the climate of
hate and manufactured fear around the religion.
But Ellison admitted that the number of fair-minded and good people in the
country by far exceeds those who try to present Muslims or any other group in a
bad light.
“This is a great country, and most people are with us,” he said. “Most
school systems would be honored to have him [Ahmed].  What we cannot do is
retreat and heed the bullies, bigots and the haters.”