Thanks to Ian Masters for putting
things in perspective. We did an extensive interview on his NPR Radio show which was
aired in 150 Radio Stations across America on the 16th evening. Ian is a
big supporter of moderation, and he and I have been on his show before. 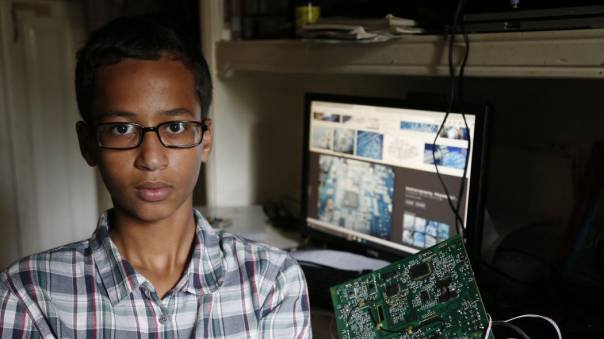 God bless Obama and Zuckerberg for their leadership. They gave hope to the hopeless and what
they did was very American; that is uplifting the spirit of Americans who are at
a disadvantage.

As opposed to most Muslims who bluntly blame the “right wingers” we choose not
to blame but find solutions, and that is, what causes one to have that fear of
Muslims and what does it take to change.

I believe knowledge leads to
understanding and understanding to acceptance and appreciation of a different point
of view, race, faith or nationality. .

We will write an open letter to the Irving School District Superintendent,
there is a dire need for education and orientation of the teachers.  I am
checking on their system, most ISD’s in Dallas area have a Multi-cultural night
every other month where kids bring their parents in their native costumes, and
bring one dish to share…. Is Irving ISD missing that?

When we know each other, most of the fears vanish into thin air.

There is room of AMI to work on such situations, but it takes a lot of time.

Here is the full Audio:

The show begins thus, “We begin with the arrest of a 14 year
old Muslim boy who is a member of the Robotics Club at MacArthur High School in
Irving, Texas. He brought a home-made digital alarm clock to school that a
teacher decided was a bomb and young Ahmed Mohamed soon found himself
handcuffed and fingerprinted by police who ignored his pleas that he had built
an alarm clock, insisting “so you tried to make a bomb?” Mike
Ghouse, the Executive Director of the American Muslim
Institution in Washington D.C. and the former President of the Together
Foundation in Dallas, Texas joins us to discuss this overwrought example of
Islamophobia that has provoked outrage with Face books head Mark Zuckerberg
tweeting “Ahmed, if you ever want to come by Face book, I’d love to meet you.
Keep Building.” And has President Obama tweeting, “Cool clock, Ahmed. Want to
bring it to the White House? We should inspire more kids like you to like
science. It’s what makes America great.”

A few good pieces on the topic:


Mike Ghouse is an Executive Director of American Muslim Institution, a proactive voice for American Muslims. He is a thinker, writer and a speaker and is committed to offer pluralistic solutions to issues of the day.